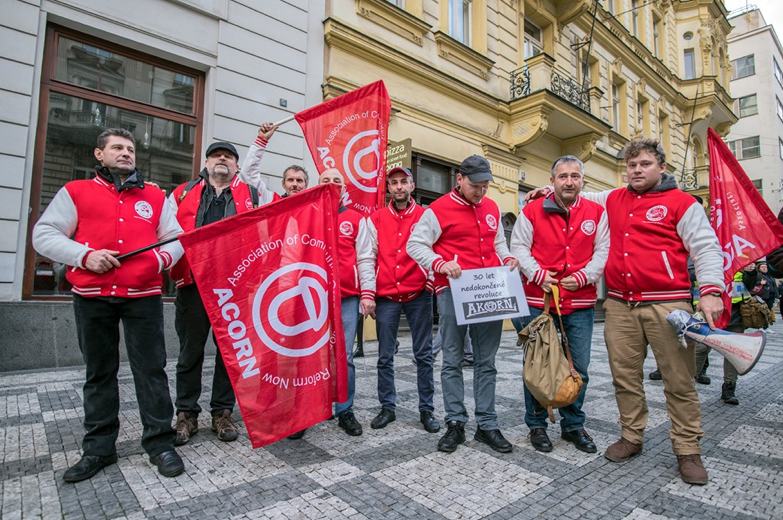 ACORN at the Forefront of the Working Class

12 members and workers of our social building cooperative and civil association met at the Republic Square to support the event called the Revolution Betrayed held by the emergent student platform Real Left.

Equality, unity and fraternity somehow disappeared yet left with a taste for the unknown fruit of freedom, which we had managed to try.

We suffered bitterly from how worms wriggled, irritated the stomach juices and triggered a thunderstorm of pathological effects, but its taste, the taste of sweetness still lingers on the palate and reminds of what we were worth and what we would like to achieve. Execution on Property, Debts, The Unemployed, The Homeless and Dead Ideas. At the event “Revolution Betrayed”, we chanted: “Velvet is not over, so let’s pull it through!” It is a slogan that certainly does not end with one demonstration or will not just repeat on the next November 17.

Czech ACORN members are considering how it can work throughout the year, prospectively until next November.

-Why not launch our own year-round campaign “Completing the Velvet” or some such? In 1989, the Civic Forum was founded. CF was supposed not only to mediate between citizens and executive bodies of the state, but to strengthen the thesis that democracy is a space for equal opportunities to offer various solutions, concepts and principles.

Public policies should engage in the form of competition, but it does not always have to be rivalry in terms of being attracted to the trough or persuading crowds. We can imagine devising and social consensus and increasing efforts to cooperate. Why do we propose the principle of political competition?

It is here to give citizens the opportunity to choose the agenda that convinces them most, which is the best. But democracy is here to stay

However, democracy is the principle for an independent platform through which citizens can propose legislation, administrative and executive decisions, engaging in social activism, as well as expressing their views on a variety of issues, such as local matters.

The Civic Forum originally stood a chance to become a platform, as a tool for citizens to exercise control in a transparent way. Parliamentary democracy is good, but it has its shortcomings

Parliamentary democracy, except for all its advantages, to a number of parties means the incessant abstention from putting the proposed changes into practice. One government spends four years trying to implement their policies The opposition makes attempts to disrupt it, explaining to the citizens that this is the wrong direction. Four years later they want to come to power and the situation is reversed That is also why we believe that a comprehensive platform of civil control and citizens’ direct influence on the legitimate and executive power would be a party principle. By offering people the means to exercise control, we simplify the way civil society works as it begins to function more directly and thus we create a more democratic environment for its full development. Society is not built in such a way, but it barely survives !!!

Therefore, we staunchly support the implementation of the idea of ​​an organization similar to the Civic Forum. For instance, a way of its instantiation could be establishing a organization that would be nonprofit in civic transparent hands and would force the current order to share power.

We think that creating a peaceful environment based on a friendly community can transform the whole political culture. At first glance, small communities seem to be unable to change anything by themselves. Nonetheless, they work internally, for example, to provide social help, establish social cooperatives, and externally, they engage in tasks such as activism.

At first glance, it is a small scale drudgery, but at the same time, small communities keep emerging and some have recently joined together.

So in our view it is possible both to influence political culture and attain certain political goals. A community does not automatically have to mean a political movement.

In a community, social work, counseling, say neighborhood assistance, is shaped, which can later grow to form cooperatives and become politically involved.

The betrayal of the CF was indeed a revolution betrayed.

CF initially assumed that there would naturally exist political parties and the notion of the party would work, but CF also counted on its own role. CF should be a community and politics should emerge at a grassroots level.

ACORN at the Forefront of the Working Class..

View all posts by admin