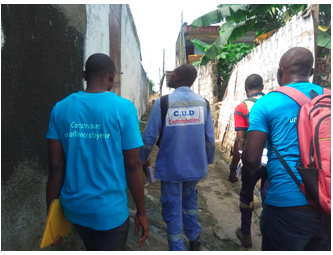 ACORN Around the World October 2018

ACORN International is GROWING. Organizing invitations are pouring in all around the world — from New Zealand, the Maldives, Germany — demand is high for ACORN tenants unions! New organizations have started out in Montpellier, France, and there is now work in Belfast, Northern Ireland. Trainee organizers are coming to New Orleans from Bulgaria and Albania for a month and from Belgium for almost three months for ACORN training!

The Organizer movie is showing in Thessaloniki, Greece as we try to trigger organizing interest, and in Brussels at the International Film Festival. In Brussels, organizer Adrien Roux will also deliver workshops on community organizing. An exciting joint proposal for training and support was recently submitted under the leadership of ACORN France, to bring together organizations and our allies in the UK, France, Bulgaria, Slovakia, and Tunisia.

A lack of street lighting lights is causing security concerns in the Grand Moulin neighbourhood, Douala. Members targeted the Urban Community of the city (CUD), taking 250 petition signatures to the administration office. This resulted in CUD agents working with OnEstEnsemble leaders, to identify where street lights are required. Members will track this issue to make sure CUD keeps their promise, and other neighborhoods affected by the same problem will also be putting the pressure on CUD.

Organizing tenants & more in the UK 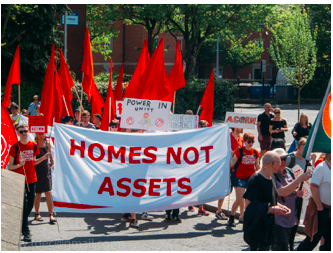 Bristol has continued its campaign for better housing provision for survivors of domestic abuse while the BS5 group launched a campaign against two local letting agents. Manchester is planning simultaneous pickets of a management company alongside Birmingham members. Sheffield’s Sharrow & Netheredge group’s first action forced a letting agent to comply with the law on fees, while Brighton has supported a demonstration in support of elderly residents trapped in a nursing home, and are organizing the student community who are in some of the most dangerous and expensive rental housing. Tenants have been coming out to Newcastle ACORN’s drop-in advice sessions. 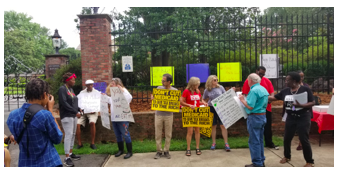 Little Rock members rallied at the Governor’s Mansion, to fight Medicare work requirements that have resulted in over 6,000 people being kicked off the program and left uninsured. Members and allies won a proposal on the ballot for the upcoming election for an $11/hr Arkansas minimum wage by 2021, and are now working to educate and mobilize voters. Shreveport members have an upcoming bargaining with one of our nursing facilities are looking into ways to get workers to contact us about issues of harassment, discrimination, and bullying in the workplace.

Victory for Muslim Women in France 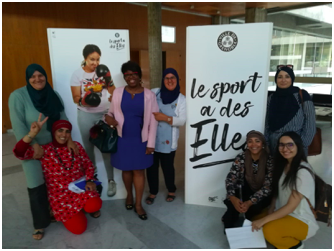 After gathering 420 petition signatures, Alliance Citoyenne members have their first victory in what is set to be a long-running battle, as Muslim women will be allowed to wear long-sleeved bathing suits in Grenoble public swimming pools. France’s Muslim population is seen as a threat to French identity from the right, and a threat to French secularism and atheism from the left. For thousands of Muslim women, this means daily discrimination and no access to basic rights.

Fighting against corruption and privatization in Peru 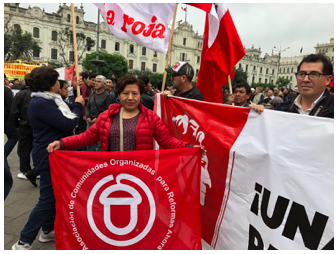 ACORN Peru has been working on the issue of rights and anti-corruption. Members are organizing for a better country, with justice and respect, and have been fighting against privatization. We have been organizing in communities in the Andes, San Juan de Lurigancho and have been supporting Ecuadorian communities. 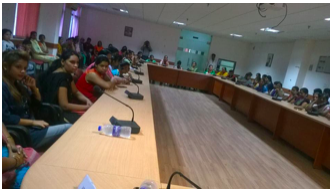 In Delhi, India women were invited out to a leadership training was organized for women which included specific a session on gender. Ms. Sarika Choudhary and Ms. Firdous, members of the Delhi Commission For Women, Govt. of NCT of Delhi participated as guest speakers. Around 80 women of all ages took part in the training!

Kenya ACORN is growing as members organize on 3 main campaigns! 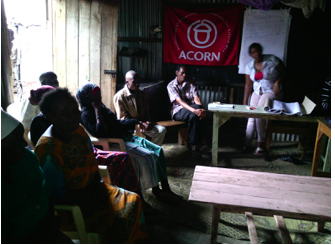 In Korogocho, one of the largest urban settlements in Nairobi-Kenya, members are organizing on issues related to education, water, and environmental sanitation. The organization has grown to over 360 members and four affiliated community-based organizations. Committee members recently attended a star-gazing meeting, and members participated in a cleanup exercise within the settlement. 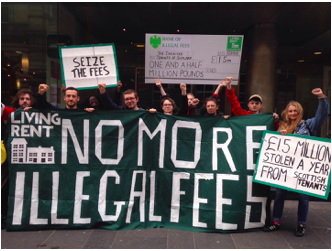 Glasgow members successfully forced the Association of Registered Letting Agents to meet our negotiation team after numerous pickets of their members, gatecrashing their conference and an investigation by our union discovered a possible £1.5m in illegal fees being charged annually. Members also helped to organize the occupation of a property owned by a landlord previously imprisoned for the death of two young men, after a fire in one of his properties. 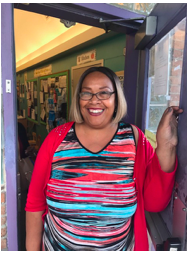 Ms. Lane has been a member of Local 100 for 19 years. She is not only the union steward for her center but also the bargaining committee member. You can hear her life story at acornradio.org. 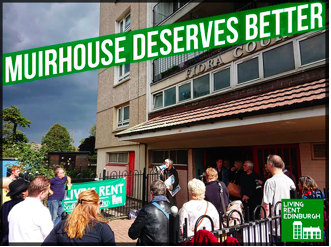 Living Rent members welcomed City Councillors to the Muirhouse neighborhood, to witness the state of disrepair in the tower blocks. As a result, a full investigation has been commissioned and repairs are scheduled.

Victory for street vendors in Bengalaru 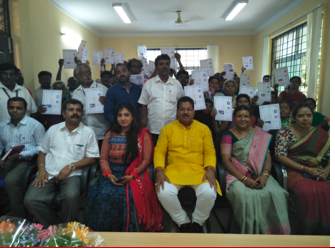 Members are relieved that the government has finally moved, and have issued license and ID cards to street vendors last week. Cards and licenses were issued at the meeting of street vendors.

Education and organizing in Honduras! 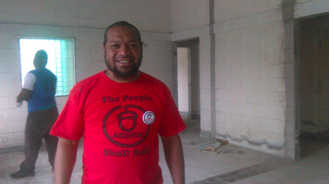 Honduras leaders have been monitoring building improvement in local communities and have been strategizing around advocacy issues. As well as door knocking, we participated in public education workshops – attended by 120 students – and community cleaning sessions. 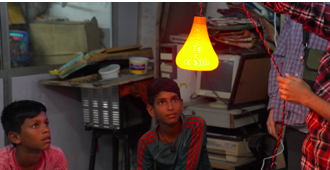 This year, the Innovation Lab has been completely renovated and is now home to exciting workshops, such as 3D printing! ACORN kids are being trained in state of the art technology, to help them qualify for future jobs in the 3D printing industry.

In Canada, Ottawa’s Agenda for Change calls for a shake-up at City Hall

In Canada, Ottawa’s Agenda for Change calls for a shake-up at City Hall 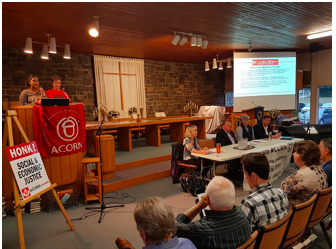 Ottawa ACORN started the Agenda for Change campaign in 2016 to ensure the same old crowd doesn’t continue to hold power at City Hall in the 2018 municipal election. 60 members came out to our Agenda for Change candidates forum on September 20th to demand a council that prioritizes the needs of its low-income constituents!

In Canada, Hamilton ACORN leaders gathered on the steps of City Hall to release a report on the substandard living conditions experienced by low to moderate income ACORN members. Members shared the report at the last Rental Housing Sub-Committee and were pleased that the committee voted to pass a Landlord Licensing Pilot for low-density rentals in two wards. We’re a step closer to city-wide landlord licensing!

Fighting for an affordable Mississauga 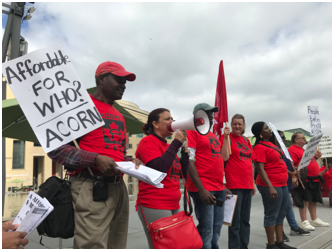 ACORN Canada members held an affordable housing petition drive to highlight rising rents across the city. Members are demanding that affordable housing is an election issue, and call for the City to take a number of steps to make housing more affordable, including using inclusionary zoning powers to ensure that 25 per cent of units in all new developments are affordable.

View all posts by admin