Living Rent Campaign in Scotland has formally affiliated with ACORN International and ACORN Scotland! They have been doing outstanding work, so we’re honored to have them formalize the affiliation. Adelante!

First meeting of ACORN Scotland’s Leith Community Organization starts with a bang. Good crowd assembles, does its business, breaks into small groups, and then after lots of discussion and democratic voting, makes the list to start taking names and kicking it up in Edinburgh!

Members of ACORN Scotland went on education campaign to get the word out about ACORN Scotland. And they also just had their 3rd Organizing Committee meeting. 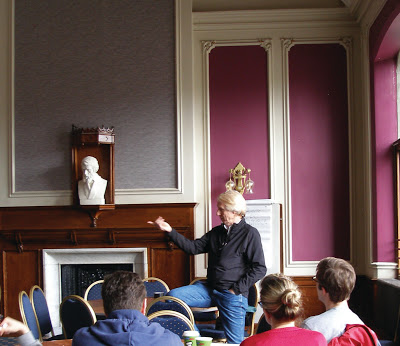 Monday, 13 May 2013 Reprinted from National Network for Change and Community ( http://www.nationalnetworkcc.com/2013/05/scotlands-activists-call-in-daddy-of.html)

WADE Rathke from the USA is a one-off.  Original has to be his epithet.

A community organiser, a self-appointed role he adopted at nineteen years old, today and 40 years later he is helping ordinary people to change swathes of societies the world over.
Founder of ACORN International, this unique individual focuses on what he calls ‘citizen wealth’ with an astounding optimism and immediacy that works for, and often achieves, transformational results.  He never doubts any citizen’s capacity to make a difference, despite the battle scars earned along the way. “The fight for change is progress itself,” he told the Network.
Activists in Scotland, no matter what their campaign, can learn from this experienced veteran who advocates less talk, more listening, direct action and being clear about the issues as key components for kick-starting change.
ACORN is the Association of Community Organisations for Reform Now. Wade resigned from that board in 2008 after 38 years as a founding member.  He is now ‘chief organizer’ for
ACORN International, built on similar lines.  His latest book Citizen Wealth:  Winning the Campaign to Save Working Families, documents his journey with enthralling stories.
Rathke is known globally as the premier organizer of low and medium income labour and community groups and an inspiration to change makers who recognise that “a personal problem becomes a political issue”.  It was on an ACORN project in Chicago that Barrack Obama cut his political teeth, a process he proudly documents in his biographies and has since staunchly defended against sometimes vicious attacks.
Sharing the story
IN May 2013 Wade Rathke visited Scotland for the first time in his long career.  He was invited and hosted by several organisers of Edinburgh Private Tenants Action Group (Eptag).  The enterprising, entrepreneurial young people who have founded this already influential organisation set up a day-school workshop in Edinburgh University’s Teviot building.  It was well attended by committed activists from Glasgow, Edinburgh and other parts of Scotland.
The goal was to seriously consider starting another ‘affiliate’ or outpost of ACORN International.  The buzz in the room became palpable as Wade’s direct style identified doable campaigns, an organising committee, weekly meetings and achievable goals.  He clearly enjoyed moving away from “litanies of despair” to tongue-in-cheek reminders that “community organisers don’t stutter”.   He engaged keenly with his audience and you could see the light of vision in his eye.
Since 2008 Rathke has travelled globally to help ordinary people do extraordinary things.  Canada, Peru, South Korea, Czech Republic, Dominican Republic, Kenya and Mexico are some of the affiliates of the global group mushrooming globally at grassroots level. Ordinary people are learning how to organise and mobilize.  Their mentor focuses on pragmatism, encouraging ‘winnable’ campaigns that drive people out of a sense of political hopelessness into a can-do state of mind.
“Justice is just-us” said Wade whose blog at chieforganizer.org daily records, probes and supports the struggles that working people face against minimum wage abuse, inequality and injustice both in his home state of Louisiana (rebuilding New Orleans after Hurricane Katrina), across the United States and the world over.
“Individuals alone don’t have the capacity for resolving long-standing grievances,” he said.  “The process is messy, it’s difficult and it can be a fight.  You need to identify and organise your constituencies, you need strong organisations to achieve the change you believe must happen to protect and empower ordinary people.”
Expect to pay up front
UNIQUE to ACORN is the payment of ‘dues’ or membership fees, a concept that Wade says does not initially sit comfortably in some cultures, but creates a strong and vital sense of  accountability.  This fundamental principle is crucial to project success, and ironically, he notes, it is the lower income members amongst diverse constituencies who pay most willingly.  At the same time, it is more often the organisers who stumble over asking.
“The key issue is the asking, not the getting,” says Wade.  “Often it’s the organisers who need to change their approach as lower income people find it incredible that anyone else would fund their fight for change.  They expect to pay dues and it is the poorest who pay most consistently and continuously.
“But with those fees comes a ‘testing’ from the members as they decide if you are making their case.  You should expect that testing, another reason to set winnable goals that are achievable within a reasonable time-frame.  Members will gauge success and develop confidence with that good feeling from wins, even though those achievements are small and incremental. ”
At the peak of its success ACORN had 500,000 members, all paying dues, and subsidiary partners amounting to 168 corporations within the “family”.   “We got big,” says Wade, “Perhaps too big and it became more difficult to manage such a big organisation.”  He admits that he has learned from some of the past experiences.   “ACORN International is built out of the US experience,” he says.
He looks back to Little Rock Arkansas in May 1970 where the National Welfare Rights Organisation (NWRO) had sent him as an organizer.  It was here that ACORN began and his first campaign was to help welfare recipients gain their basic needs.  It was the starting point from which all the rest has unfolded.   As a young man already dedicated to ‘Adequate Income Now’ he knew that “people have to come together to generate change” and that mantra still drives him today.  He emphasizes the importance and power of “playing in teams” referring to Bowling Alone, Robert Putnam’s book of the last decade on this subject, listed below.
Our society can learn a lot from all of this in the fluid state of change that is Scotland today.  This article only scratches the surface of the achievements in the life and times of the political force that is Wade Rathke.
Further investigation may take your own activism to new and better levels.  To learn more, follow the links below.

Housing activists and organizers in Edinburgh, Scotland participate in an ACORN training by Chief Organizer Wade Rathke on May 11th, 2013

Melanie Craxton of the University of Edinburgh (Scotland) and Rochester, New York, does not believe in letting a moment go to waste, so she wanted to make her summer count for something. She had spent time as an intern with the Grameen Bank in Bangladesh in the past, and could see from the Remittance Justice Campaign that there were similarities as well as an interest by ACORN International in tackling the complexities of microfinance for our membership, evaluating the field, and even building tools to allow our members in the slums to be better “loan consumers.” In an exciting development to both Melanie and ACORN International, we are exchanging three months of a hot and humid New Orleans summer in 2011 for her skills and help in producing our research on microfinance which we will roll out in the fall of this year.